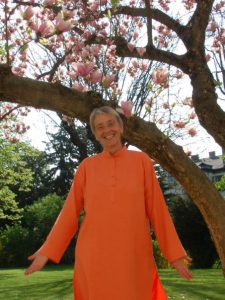 Although she originally studied Theology her university studies soon expanded to Education, Psychology, Philosophy and Art and Design (Ceramics). Different teaching jobs (in colleges and universities) in various countries followed; as well as extensive travel and study in Asia, Australia and America (Taoism, Zen and Tibetan Buddhism and various indigenous spiritual paths).

Deep involvement in Meditation and the practice of Sattipahana (mindfulness) finally led her to Yoga and Vedanta. She worked with several great spiritual Masters among them Zen-Masters, great Siddhas, the Tibetan Lama and Tulku T.Y.S. Gangchen, the great Yogi Swami Maheshananda, H.H. Swami Anubhavananda (Supreme Acharya of Vedanta) and Mandeleshwara Swami Veda Bharati.

In 1997 she made her Doctorate in Eco-philosophy on the subjects of the Mahabhutas (Five Great Elements) and has since contributed world-wide in conferences and workshops especially in the two areas of ‘the Five Elements’ and Yoga Philosophy in its widest sense. These include international congresses on World Peace (UN) and complementary Medicine.

Presently she gives workshops on various aspects of “Yoga philosophy” and meditation Retreats. In 1997 she was awarded a ‘World-Peace Prize’ for contributions to World Peace (LGWPF/ NGO of UN).

Swamiji is the author of:

For more information on Swami Nityamuktananda Saraswati, please visit her website at www.athayoga.info